Client Charged With Murder – Acquitted On All Charges

Client charged with murder and obstruction of justice in December 2017. Client was tried along with three other co-defendants in February 2022. Client was acquitted on all charges after 2.5 weeks of trial and about 1.5 hours of jury deliberation. Client’s record is eligible for expungement.

Client Charged With Rape Fall Of 2021 – Charges Were Dismissed

Client charged with criminal sexual conduct (rape) while visiting Myrtle Beach in fall of 2021. After defense investigation and presentation to the prosecutor, all charges were dismissed. Client’s record is being expunged.

Two other clients, separately, charged with Sexually based crimes in 2021 and 2022, each client facing 20 years. Fought for each client’s rights and was able to get the charges dismissed and Clients records are being expunged.

Client was charged with voluntary manslaughter and harboring dangerous animals in a dog mauling case. Charges were dismissed after a successful preliminary hearing.

Client charged in the fall of 2021 with a sexually based offense in Georgetown County. Able to get the charge thrown out at preliminary hearing after many months of discussions and review of all evidence. Client’s record is being expunged.

Client and her children injured in motor vehicle accident. I was hired in late March 2022, and at-fault insurance carrier tendered full policy limits by July 8, 2022.

Retained in a Wrongful Death matter by father of pedestrian killed in a motor vehicle accident after unsuccessful representation by another firm with an offer of settlement of $20,000 – able to fight for the deceased and secure a settlement of approximately $180,000.

Charges for possession of marijuana (6 pounds) with intent to distribute. Able to arrange for a plea to a conditional discharge, whereby the charge was eventually dismissed.

Client charged with multiple counts of drug trafficking, murder and weapons charges in 2018 facing life in prison. After exhaustive review of discovery materials and many discussions with the prosecution, all drug charges were dismissed and client pled to a two weapons charges in May 2020 and received probationary sentence.

Client charged with two counts of murder and was facing a life sentence. After months of preparation client went to trial in November 2020. The State called numerous witnesses, including proffered co-defendants and expert witnesses. After six days of trial and nine hours of jury deliberations, my client was acquitted. Client was finally returned to his family after 27 months.

Client was recorded on video shooting another man, admitted to the shooting and gave law enforcement the weapon used in the shooting. Charged with numerous offenses including attempted murder and assault and battery, first degree. Client faced a possible 100-year sentence. Allowed to plea to one count of assault and received a Youthful Offender Act sentence suspended to probation.

Client charged with kidnapping; criminal domestic violence, high and aggravated; and numerous other charges. Client faced a possible 108-year sentence. Able to get the charges reduced to assault and battery, second degree, and receive a sentence of time served.

Client charged with felony DUI resulting in death. Bad facts with a high rate of speed and overwhelming evidence of guilt, so little choice but to plead. Client faced a possible 25-year prison sentence. Carefully worked the case and successfully argued to the court to allow client to serve a 30-month sentence on home detention – she did not have to go to prison.

Client charged in the alleged kidnapping and gang rape of an individual. Took on the case approximately 14 months after client was charged. Started by getting client’s bond modified to remove a GPS monitor. Worked the case and was able to prove the state’s case was fatally flawed – case dismissed.

Multiple clients charged with DUIs, wherein clients’ cases were either dismissed or clients were allowed to plead to lesser charges with dismissals of their DUIs.

Many clients charged with drug offenses, including distribution, wherein the charges were either reduced or dismissed. One client facing 15 years in prison was allowed to plead to a misdemeanor charge (30 days) with a sentence of time served.

Often, a criminal conviction is not the answer. In many instances, I have been able to convince the prosecutor or court to allow clients to enter into diversion programs instead of receiving a criminal record.

I secured a $425,000 settlement for a family who filed a wrongful death claim. 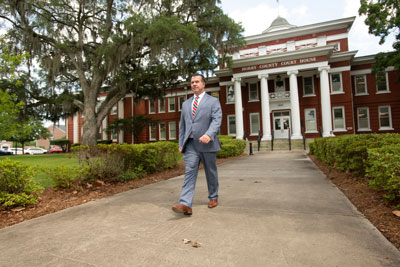