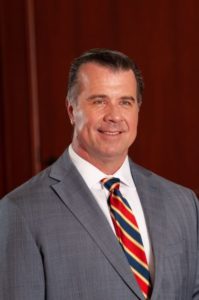 Experienced trial attorney, Brad C. Richardson is the principal and founding attorney of The Law Office of Brad C. Richardson, LLC serving the Grand Strand and the Pee Dee, including Myrtle Beach, all of Horry and Georgetown Counties as well as Marion County. Growing up in Marion, South Carolina, Mr. Richardson learned the value of hard work, dedication to clients, and devotion to service watching his parents build a thriving business while giving back to the community. Brad carried these lessons with him to Wofford College where he earned his undergraduate degree and eventually to the University of South Carolina School of Law where Mr. Richardson earned his Juris Doctorate.

Upon graduation, Mr. Richardson returned to the Pee Dee and the Grand Strand, working with the law firm of J. Scott Long and Associates, P.A. for two years before joining the Fifteenth Circuit Solicitor's Office in January 2003. Working up through the ranks, Mr. Richardson has prosecuted literally thousands of cases over almost 13 years. Whether the case originated in Myrtle Beach, Conway, North Myrtle Beach or in Horry County, time and again, Mr. Richardson showed his acumen for trials, reaching successful verdicts on numerous high profile and newsworthy cases, including Murder for Hire, Double Murder, Criminal Sexual Conduct, Drug Trafficking and Felony Driving Under the Influence Resulting in Death, among others. Success being rewarded, Mr. Richardson was promoted time and again, eventually being trusted to train numerous new prosecutors.

After the better part of a decade and a half, Mr. Richardson recognized the need for a new attorney who is prepared to serve the Grand Strand and the Pee Dee. With a deep knowledge and love of the area, a keen intellect and the ability and willingness to fight, Mr. Richardson is uniquely suited to represent you. Whether you are a victim of an accident, slip and fall, have lost a loved one to a wrongful death or have been charged with a criminal offense, Mr. Richardson is here to protect your rights and fight your fight. The Right Lawyer, Right Now - Brad C. Richardson.